One of my favorite things about the  cold weather is the increase in the number of movie nights that my roommates and I have.  More specifically, there is an increase in the number of  “scary  movies” that we watch. I’m a firm believer that you really cannot have good October without a few of these scary movie nights. Pop some popcorn, build a giant super pallet on your living room,  grab your snuggie, turn out all the lights and you’re all set.

Personally, I have a love/hate relationship with horror flicks. I really like to watch them. Really, I wouldn’t turn one down no matter how “B-rated” it may be. Zombie movies are my favorite, but I will watch ANYTHING. In fact, I got started on “horror movies” way earlier than the average pup. I’m not sure whether my mom just didn’t see anything wrong with showing them to me, or if she really didn’t think they would affect me- but I can honestly say I remember watching Poltergeist at 5 years old.

As much as I like them  and I appreciate that my mother didn’t censor them from me, I have a feeling that movies of the horror genre had a greater influence on me than anyone would have guessed. You might even say I have been scarred for life. So in light of it being “National Scary Movie Week” or at least “My House Scary Movie Week ,” I share with you the 5 movies that had the most profound affect on me as a child. Arachnophobia: I recently re-watched this movie and I have come to the conclusion that I must have been thinking of a different movie. When I watched it way back when, it was definitely, in no way shape or form- a comedy. This movie absolutely terrified me. I remember making my sister come and sit in the bathroom with me while I showered because I was thoroughly convinced that a spider was going to come up the drain and instantly kill me with it’s poisonous venom. I was scared to eat popcorn because of the scene where a spider is in the bottom of the bowl.  And to this day, if I see a spider, no matter what breed- chances are you will see me pull a cartoon and run straight through the door.

Child’s Play: I have to preface this with the fact that my parents were of the belief that I really liked playing with dolls. Every year they would drag me to the local doll show and buy weird creepy used dolls that I had to pretend to enjoy. Truth was, the only “dolls” I ever really loved was a Teddy Bear named Teddy, and my Teddy Ruxpin.  Even before I saw this movie I was convinced that my dolls would come alive when no one was around. I blame this on my viewing of Jim Henson’s “A Christmas Toy” about a kajillion times. (If you haven’t seen this, it was basically an earlier, more primitive version of “The Toy Story.”) I was already very sensitive about my doll’s feelings, and didn’t want any of them to feel more important than the others. So after I caught a viewing of Child’s Play at the ripe old age of 7, I was more scared than ever to piss any of my dolls off. Every night before I snuggled up to Teddy, (the regular stuffed animal not Ruxpin because he was hard) I would walk around my room and kiss each and every doll goodnight and tell them that I loved them.

There was one doll in particular that frightened me the most. It was nearly life sized and had red unruly hair, very a la’ Chucky. I grew convinced that this particular doll in a one piece swimsuit would be my demise. I paid it extra special attention, even though it really frightened the bejeezus out of me. I started noticing that it was never in the same place that I left it. I finally told my mother and she swore that she would get rid of it for good. She said she burned it. Years later, when I was a Junior in High School I came home to find that swimsuit doll on my day bead. You might say I went a little ballistic. I thought it had come back for the sequel. My family thought it was hilarious.

Pet Cemetery: My dad grew up in the house where my grandparent’s still live. He had 3 other siblings, and came from a family that really loved animals. I loved my grandparent’s house because they had woods in their backyard where my cousins and I would frolic and build forts and such. I loved it all, except for one little area, just barely visible from the back room where I had to sleep. Their pet cemetery. Ah hells no. This shit even has gravestones and everything. I never really thought much about it until I saw the movie. Then I would think of practically any excuse not to have to stay over at their house (even though it was my favorite place on earth) and if I did have to stay the night I would ask to sleep with my sister. On the occasions where I had no choice but to sleep in the back room, I would stay up all night, one eye steadily focused  the white grave stone in the distance. I imagined seeing dogs and cats and raccoons rise from the graves to attack me. Those gravestones still scare me to this day.

Jaws: My mom had an obsession with pretty much everything that could hurt me (vampires, zombies, spiders, boogie men) and sharks were no exception. Jaws was one of her favorite movies, and consequently one of the movies that I watched as a very young child. As if that movie didn’t scar me enough, every summer my family would make a six hour drive to the coast. My mother would spend the entire six hours reading true stories of shark attacks out loud. As a result, I spent the better half of every summer vacation scouting the ocean for sharks. While my cousins would all take their floats out as far as they could go, I would stay knee deep-eyes out.  I am finally to the point where I’m not afraid to go in the water, but you can bet I would be VERY aware of any dorsal-like fins that may appear in my near vicinity (3 square miles, to be exact.)

The Return to Oz: I haven’t seen this in a very long time (because damnit it was scary) but I do remember it quite clearly. I think. Am I even thinking of the right movie? All of Dorothy’s old friends were stoned (in the turned to rock sense, not doing drugs…) 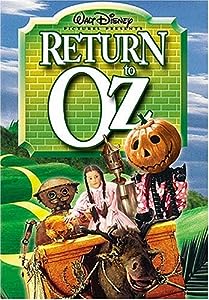 Cover of Return to Oz

She meets up with a talking reindeer, a weird robot thingy called Tick-Tock, and a man with an empty pumpkin head. If that is not creepy, then I don’t know what is. I was mostly scared of the lady that changed her heads like they were wigs. Even Dorothy played by that scary girl from the Craft, and she is creepy enough by herself. I don’t have much else to say about this movie, but I know it terrified me.  The trailer is below, just in case you are curious.

As always, stay classy on this wonderfully beautiful Tuesday.